No, nothing to do with guns and aiming, although Trigger Point Therapy – as anyone who has experienced it will testify – is far from painless!

A Trigger Point is defined as

‘A hyper-irritable spot in skeletal muscle that is associated with a hypersensitive palpable nodule in a taut band’.

In essence, it is an especially tender spot similar to a muscle knot. Like a normal knot, it prevents the muscle from fully extending, and generally weakens its performance, but on top of this, a Trigger Point has the potential to send referred pain to other areas of the body.

The referred pains caused by a Trigger Point can be extremely acute, sometimes bad enough to send the sufferer to the doctor. The problem this causes is that while the pain might be in the upper arm, the Trigger Point, its source, might be at the base of the shoulder blade, and so the painful area itself would not be presenting any obvious lesions or tensions that could be causing the pain, and so the pain can either be misdiagnosed as other conditions such as Angina or a Migraine, or they might be simply told they are imagining it, or given pain killers and told it will no doubt stop at some point… 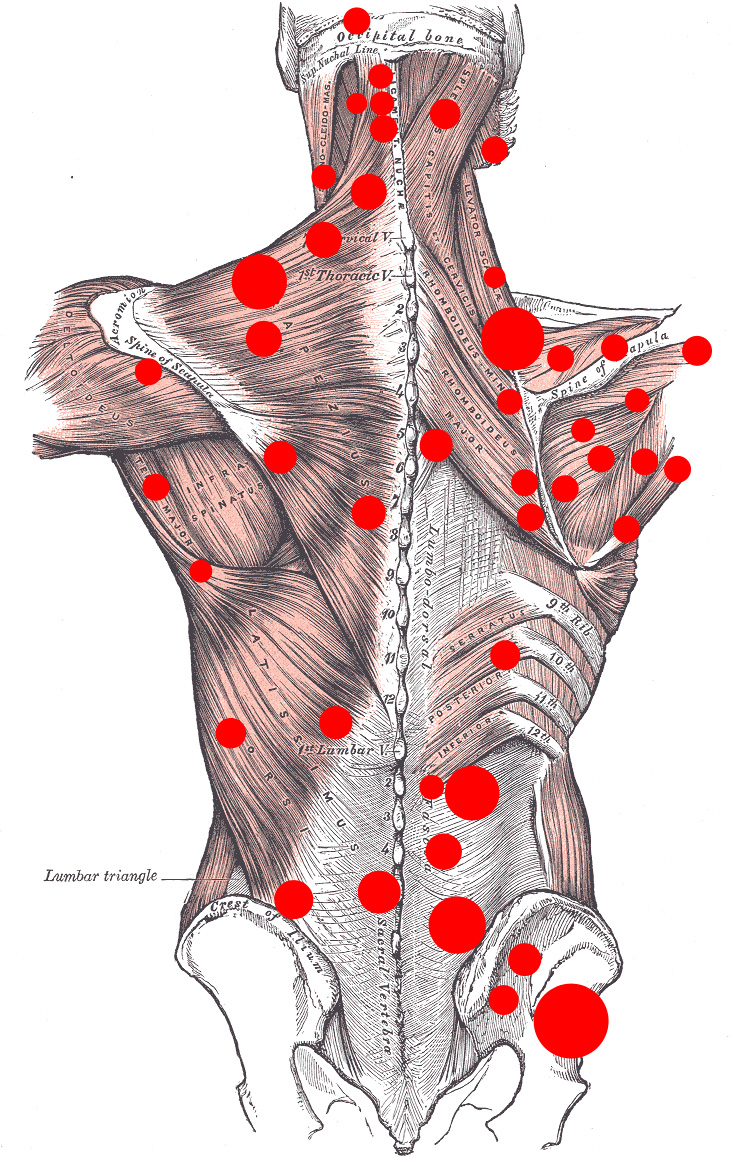 Again, much like a muscle knot, a Trigger Point can develop through repetitive stresses on a muscle, such as the position, poor posture or a particular job puts it into. There can also be predisposing factors such as recent over-exercise, or an injury to the muscle.

The Signs
Sufferers from an active Trigger Point can experience a range of symptoms such as poor sleep, weakness in the affected muscle, numbness or even a noticeable feeling of depression.

The Treatment
A Massage Therapist will use a combination of palpation to find the exact point, pressurisation (the painful part) for up to 7 seconds at a time, followed by strokes to the surrounding area to encourage a ‘flow and flush’ reaction within the muscle.  Used together, these can dispel the point and thus relieve the pain in the affected area. This can often take more than one treatment, but once identified, the point can be pursued until it is smoothed. Treatment is more effective if the patient is motivated to self help as well – by exercising and stretching regularly and keeping to a good nutritional plan.

"Neck pain is, well, a pain in the neck—literally—that can be caused by several things, including stress, bad posture, injuries, and poor sleeping position. Thankfully, many massage techniques can bring some much-needed relief."#painreliever #massagetherapist #bodyhealth ... See MoreSee Less

**Attention Alternative Therapists in the North East**Are you looking for a massage room in Newcastle?Then look no further than The Therapy Rooms, we have space here to welcome another therapist! We will help you fill your diary and have availability from half a day to 5 days a week.If you're interested, please send your C.V. to Tracy at tracy@thetherapyroomsnewcastle.co.uk#nefollowers #roomforhire #alternativetherapistwww.thetherapyroomsnewcastle.co.uk/about/ ... See MoreSee Less